As requested, here are the tracks from the flipside of The Perfect Strangers: Not To Be Taken cassette, labelled as And Band: Outhern. Being that the track titles are in Kawowski’s inimitable handwriting, let’s assume that the cassette is a dub he made from an original compilation by Lindsay Maitland, that came into Stu’s possession c.1984.

The Outhern tracks were recorded in 1981 at Bealey Ave, Christchurch, after Richard Sedger had left, though he may play on some.

The bonus track (March of the Stronghold) was recorded in 1981 at the High St practice room that Perfect Strangers ‘Not to be Taken’ was recorded at.

Some ‘Outhern’ tracks were recorded there too, at least pretty sure ‘March of the Stronghold’ was.

EFS is a reference to Can’s ethnological forgery series. A series of tracks on Can albums, known as “Ethnological Forgery Series”, abbreviated to “E.F.S”, demonstrated the band’s ability to successfully recreate ethnic-sounding Music:. – Wiki.

Tracklist details updated 3 May 2017, after consultation with G.D.H. 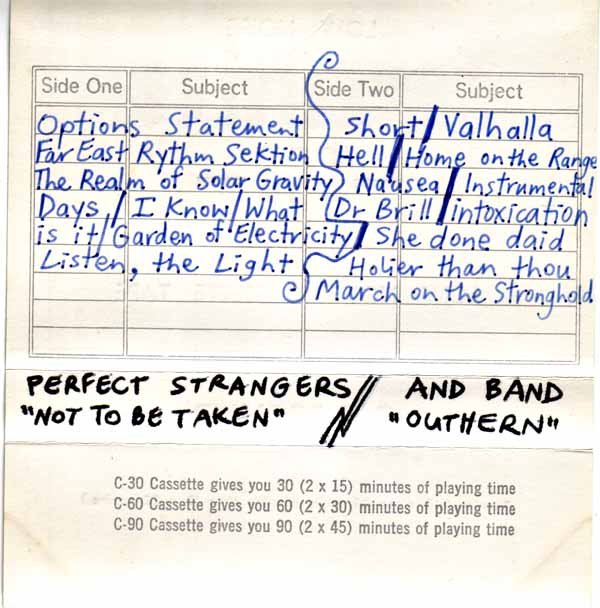 2 thought on “The And Band: Outhern”