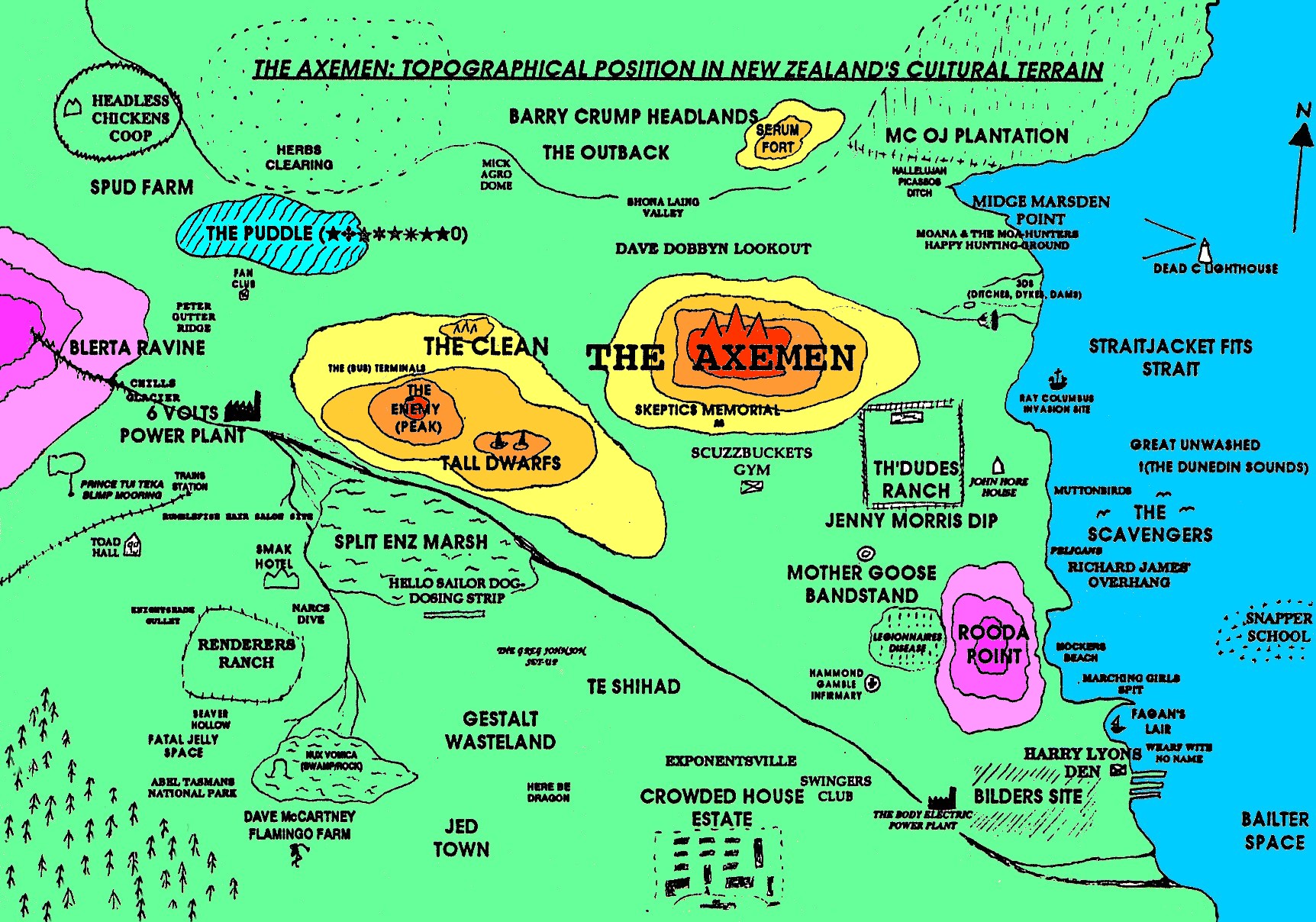 This is a postcard-size reproduction of the large (A0) classroom poster prepared in the early 1990s by Axemen for use in NZ schools. Stevie was barely out of school himself when the band’s first few gigs took place in Dunedin in 1983, but when he moved into gainful employment later that year as a screenprinter, there was a younger-still McCabe within spitting-distance, clutching his drumsticks and singing up a storm, waiting for the call to step up onto the world’s stage and join the Axemen in their utopian South Dunedin of the mind . . . 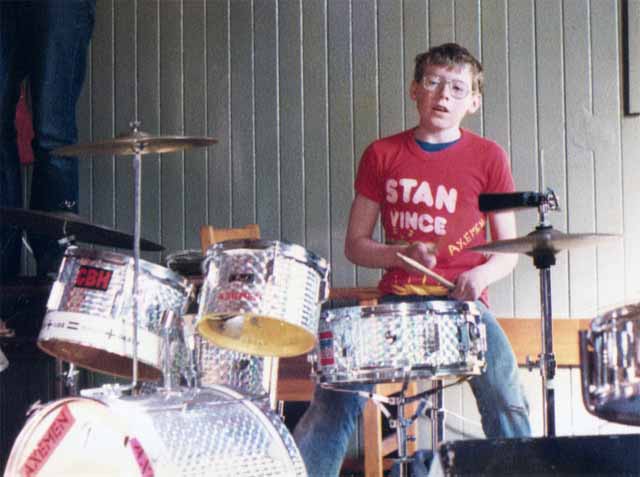 Jeff played alongside 15-year-old Steve in the Spiderwebs, based in the Hell Farm Party Shed, where they made up songs, rehearsed and recorded. They supported Steve’s band with Pete Rees, the Gorillas, when Virg and Bernie Smith and Lisa Preston attended a live gig at the shed in the summer of 1982. The team here at Y2K hasn’t yet uncovered any Spiderwebs tapes from the various vaults and stashes at their disposal, but plans to undertake a careful search that may involve a bus trip in the near future.

Jeff next joined Steve & Bob’s pre-Stu proto-Axemen when they recorded the SCENES LIKE BEADS cassette at Hell Farm early in September of 1983. He sings his own lyrics on the following songs from that set. . .

jack the ripper
Jack the ripper took off his slipper
He pushed me from the back and I shouted, “Look at that”
—Jeff profiles the infamous Victorian killer to an incongruously jaunty South Dunedin reggae rhythm supplied by Steve & Bob. It must be getting late in the day at Hell Farm, since the TV is on and Fawlty Towers can be heard in the background. 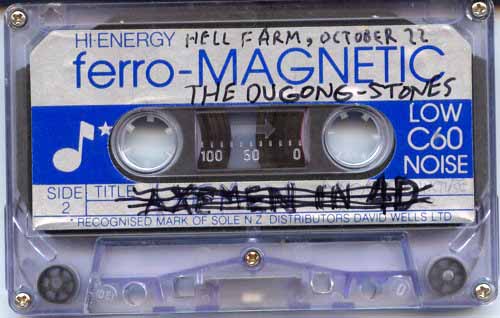 The next three songs all come from a session recorded at Hell Farm on October 22, 1983, featuring Jeff-Steve-Bob calling themselves The Dugong Stones. They recorded 7 songs. Two days later the Axemen with Stu on drums and drum-machine played their single live gig at Hell Farm (the band was about to get its first taste of the Christchurch pub scene, from which it would barely return alive), sharing the Party Shed’s concrete floor with The Dugong Stones as they played their one & only show. Jeff mostly drummed for the Dugongs, as he does on the next two tracks, but he returns to sing his own lyrics on the third. . .

monster on the loose

Jeff returned as a guest on the MICK’S DANCEFLOOR (MIX) album, playing a recorder & singing another of his own lyrics, “In A Forest,” recorded again at Hell Farm in early November. This time Stu drums while Bob & Steve add guitars to Jeff’s typically spooky tale of what befell him and his greyhound dog in a tree-filled space. in a forest

In January of 1984 Jeff’s political sensibilities were awakened as he took part in the Axemen’s BIG CHEAP MOTEL protest album project, joining the band onstage at Hagley Park to add his inimitable drumming to the instruments & voices raised in defiant opposition to a blatant display of soulless big-money sexism. Not yet 10 years old, he rocked the complacent anti-consciousness of Chri$tchurch corp(se)orate capitali$m like he was 10 feet tall.

Jeff continued to appear infrequently with the Axemen throughout 1984, for instance at the England St and Carlyle St hall gigs, a series of Saturday & Sunday shows at unlicensed venues which became something of a focal point for the many underage innercity punks with often diverging concerns, briefly united in the cause of celebrating the marriage of noise, humour & multiple viewpoints which the gigs embodied at their best. The “something for everyone” quality of the hall shows is evident in the following roll-call of bands & performers who took part: Scorched Earth Policy, All Fall Down, Gillmen, McGoohans, Connossieurs, Octopus Ink, Toerag and others (apologies to those not named; Y2K will update this list when further information arrives).

At a rehearsal for the Carlyle St Hall gig in September, Jeff’s next two songs were recorded. Stu K was in Absentia, the mystical Mexican village. Jeff, Stevie & Bob are joined on both tracks by Gordo Nodrog Baird, bass, & Al Rite, sax.

i don’t have the energy
—Jeff’s awareness remains strong; his lyrics combine canny punk nay-saying with a self-deprecating shrug at the #1 pitfall injuring punks of all stripes, apathy.

the little green man (from bardamaloo)

—Long before notions of lo-fi & no-fi became ideological hobbyhorses, Axemen adopted the preferred homonyms sci-fi, psy-fi & sigh-fi to telegraph (1) their enthusiasm for science-fictional alternatives to the moribund hegemony, (2) their faith in the telepathic potential of musical communication, and (3) their willingness to inhabit a sound-continuum conducive to expressing the pleasures & pains (sigh!) inherent in all life-choice interactions. Jeff’s unsophisticated nod to the alien constitutes a “welcome, come on in” to the once-feared “other” and deftly fuses the diverse elements at play in the Axemen collective sci-psy-sigh-psyche.

So thanks again for the music to Jeff McCabe; he may have been the littlest of the Axemen, but his contribution was huge.

One thought on “Derailing the terrain”