In this essay Stevie McCabe recounts the extraordinary events and undertakings which led up to E@rworm being invited to, and ultimately ended up headlining the infamous and iconic ‘bend the bars’ benefit gig held at the double happiness bar in Columbus Ohio, Aug 5 2016
1: the tunnel
I first met Richini in the summer of ’69 when the tunnel was just being built. Sure we were both babies at the time but it never came across ourselves to think about each other in those terms – we were just people.
Fast forward to 2016…
Richini and McCabe’s paths were once again to cross as was always destined – there are piteous few tunnel babies that made it into the 21st century alone without benefit of the ongoing support of their loved ones.
Ostensibly looking for couchspace, McCabe hounded Richini relentlessly until he finally got his foot in the door in the divisive Columbus of 2016. And so it was.
From that moment the stage was set for amazing things to happen.
2: enter kevin
On or about 2 August 2016 we received a visit from an unknown quantity: Kevin Failure from Pink Reason [google him kids, show some respect] turns up out if the blue asking if there’s any possible way we could make an appearance at his upcoming ‘bend the bars’ rock festival to be held at Double Happiness bar this coming Friday.
This was but one of what would become an increasing number of seemingly small pivot-points which would shape the future of all involved – and possibly the demise of humanity itself .
3: bend the bars

The first I heard of the ‘bend the bars’ event was when Kevin came round and kicked in the news that authorities in Maracopa county, FLA had been forcing miscreant children and adult prisoners to refrain from presenting alternative texts to the constitution (ie the bible an Q’uran)  to their fellow citizens, which stirred a nationwide outcry as to where these ‘prisoners of conscience’ were getting their information from and 93 percent said ‘facebook’ bur could see it wasn’t that comfortable for them. i think this pope is clean.
As events started playing out at Standing Rock and in the level of public awareness of the injustices meted out to every one of us who is not a member of the global elite , and pockets across the union started whispering of secession it became all too apparent that some sort of event would  be the only way we could get our message across.
enter the double happiness crew. 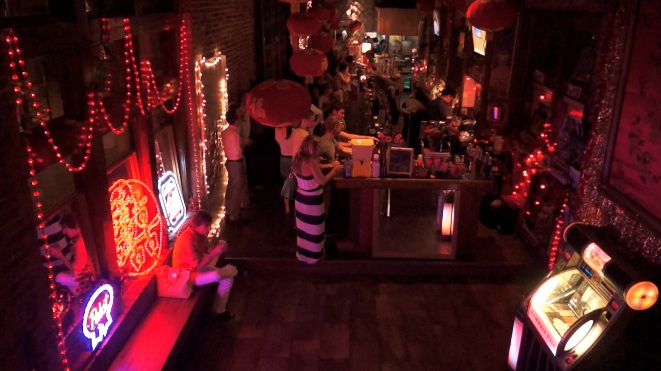 After tirelessly bouncing ideas with every rock venue in Columbus it was almost instantaneously settled. the double happiness bar would indeed be the center of  the epochal proceedings providing not only funding but protection for any and all  attendees.
at that moment the ‘bend the bars’ establishment realized they had a media fervor on their hands, and the landmark double happiness gig came into play as a reality. 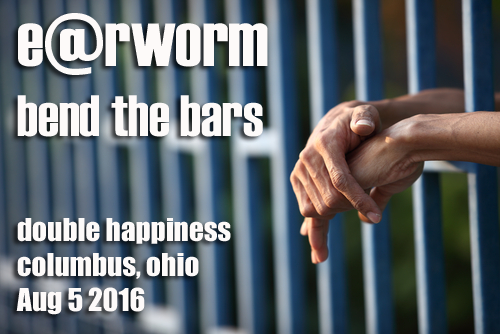 Prisoners were asked to design their own posters for the gig but were chastened by not being allowed to put them up in their own cells for fear of another ‘Shawshank Rebellion’/El Chapo  type sophisticated tunneling breakout; yet some of these survive to this day.
this was our Woodstock, what more can i say. were we a phenomenon, yes, will we be remembered time will tell.
All i know is this was our Woodstock. just listen.*
*Special note: the part of Bree ‘frickin’ Ftick was undertaken by understudy Matt Horseshit for this particular live performance. In addition is regular role as stage sound engineer he effortlessly hooked up the awesome 8 track separated sound you hear here then proceeded to cut deep on the gat almost as ir were a cynical rejoinder.
Santa and the rainman wept. i didn’t.