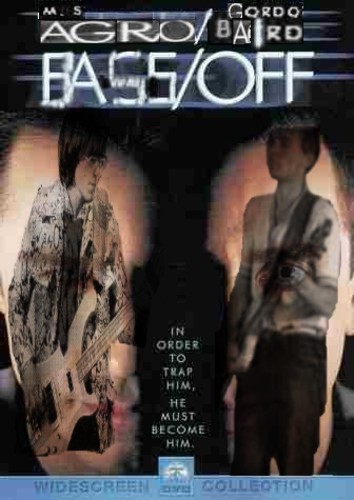 M. S. AGRO was Mick Elborado, who played in early 80s Christchurch group Drowning Is Easy and from 1982-6 was part of the incredible Scorched Earth Policy, a band about whom Stu, Steve & Bob soon made their own policy—never to miss them in action.

Stu: Buck from Scorched Earth Policy saw Axemen play at the Star & Garter and invited us to play with them. Stevie was impressed because he’d seen Buck before hanging around the pub laughing with a bunch of people and he commented, “Looks like we’re in with the gentry, now.” Bob of course totally mishears Steve and thinks SEP are Bobbie Gentry’s backing band.

Steve: Comes the gig with SEP, Brannigan is late, Stu & I are trying to calm down the audience going, “We’ll start when our buddy from South Dunedin gets here; must be having a rough time crossing the Rakaia bridge, etc.” Mick offered to fill in & so we started playing, Bob finally arrives & he’s got all these Bobbie Gentry LPs he brought up with him on the bus to see if he can get their autographs on. Mick played the whole set with us & Bob kept on trying to get him to play ‘Ode To Billie Joe,’ only Mick totally mishears & starts playing ‘Billie Jean.’ After that we saw his band play, they were spookily good & Bob had this weird puzzled look on his face. Mick played bass with us for a couple of months after that.

Bob: The first time I saw Scorched Earth Policy, I think I’d been drinking coffee wine & they just made complete sense, but in a really scary way. They were all these things that I thought it would take a band years to become, so fierce & focused, & really distinctly their own sound (& I think they’d only been together a short time by then), no Bobbie Gentry stuff at all. I was convinced they must all be psychotic. But when they weren’t playing they seemed like these really low-key relaxed people. Maybe they were allergic to their audience, like Superman & kryptonite, and SEP had to erect these sonic barriers simply to be able to stand there long enough to play some songs. Then by the time they finished playing they’d be sapped of their superpowers and just wander around chatting and drinking like nothing weird had gone on. Stevie & I dubbed this manner the Scorched Earth Policy “tic” or SEPtic, and devoted long hours (the 80-minute ones) to uncovering its secret. These sessions became known as the SEPtic Think-Tank. When their DUST TO DUST record came out, around 1984, we conducted numerous Vulcan mind-melt exercises using it as soundtrack and concluded that while we enjoyed coffee wine (the Think-Tank morphed into a Drink-Tank pretty fast), those Scorchers must’ve been drinking radioactive blood.

mouldie (leg story) excerpt (stereo)
— this is just under 2 minutes of a song that sometimes went on longer than 10 (see below). Luckily someone turned the tape on and got this much, as it’s a fine example of early axemenomena and Mick is playing bass all over it, in a hurry that is pure Agro, frantic but precise. Live from the Gladstone, Christchurch, New Year’s Eve 1983.

shirt-cuffed like a bladder (stereo)
— Mick pins this song down from the getgo and the way his riff melds with Stu’s propulsive chug is so Vulcan it has pointy ears and finds ordinary humans fascinating though illogical. Then the six million dollar man theme staggers out of Steve’s guitar. There’s a version of this on MICK’S DANCEFLOOR (MIX) but that’s a combined live/studio splice; this one is all live (it’s alive!) at the Star & Garter, the first time Mick played with the band, November 4, 1983, and quite likely the first time he ever heard this song. 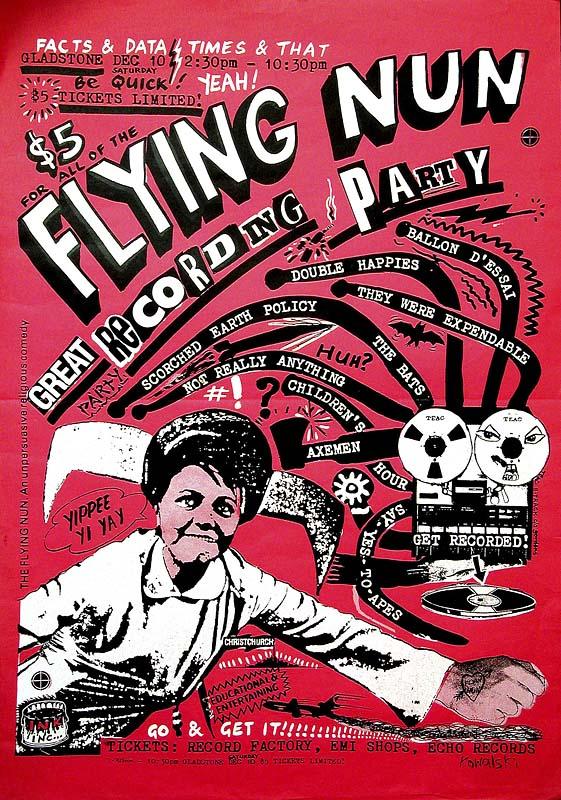 The next two songs are live from the gig postered above, the Flying Nun Recording Party (affectionately known as the Flying Fuck) held at the Gladstone on 10 December 1983. That gig probably merits a post of its own (anyone?), but let’s stick with Mick for now. Earlier that same day he rehearsed with the Axemen and saxophone addict Arthur Sheep, ostensibly learning a batch of new songs but fortuitously stumbling upon oblique nongenre sci-psy-sigh-fi spacepunkjazz while they were at it (see & hear the ETHER BREATHER HABITAT post, currently available in mono but eventually to be rejigged in STEREO). Mick’s spirited playfulness in combination with the Sheep’s playful spiritedness excited the others so much that they deliberately didn’t practice a new song of Steve & Bob’s called “Pulp For The Masses” but played it at the gig anyway. The sheer amount of sound the band generated for their half-hour set that night had been equaled at some earlier freak-outs (and once at a love-in), but it had never been recorded before on anything bigger than a walkman. The other big part of the excitement about the gig was that each set would be recorded on an 8-track reel-to-reel, and for many if not all of the bands who performed, the prospect of getting their material down via such hi-tech wizardry was intoxicating enough, never mind the coffee wine, the ether, the codeine, the beer. Of the 9 songs Axemen played, 8 were caught on 8-track, and the last song, “The Yeasty Mayor,” turned up on the last side of the THREE VIRGINS 2LP released by Flying Nun 2.5 years later. Meanwhile back at the Flying Fuck, notice the atomic-blood-slurping Scorched Earth Policy were on the bill SO MICK PLAYED TWICE! Even the guy’s aura is in STEREO. . .

pulp for the masses (stereo)
— Steve: “This is a tribute to the late Jimi Hendrix.”

the founders-day man (stereo)
—Steve: “This is a tribute to the late John Lennon.” 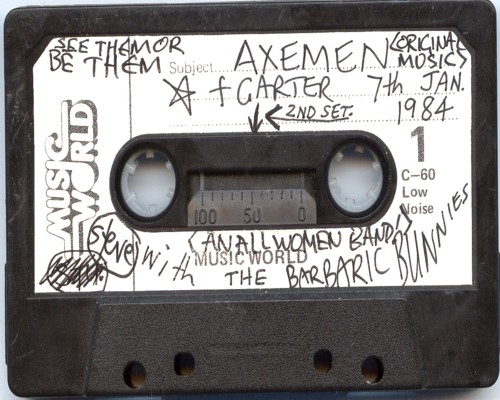 Fastforward about a month to a riotous gig at the Star & Garter on 7 January, 1984. Wellington punk stirrers the Barbaric Bunnies (notorious for their Shirley Bassey-inspired poke at mere males called “Hey Big Wanker!”) came to town and their shared show with Axemen was promoted in the local press as featuring “Two All-Women Bands.” On-stage that night, Bob quipped to the audience, “Obviously there was some sort of mistake in the newspaper ad; one would hardly describe the Barbaric Bunnies as women.”

the zit (stereo)
— this starts off sounding remarkably like “The Yeasty Mayor” but Mick’s bouncing 2-note drill, Stu’s falling-down-the-stairs dactylologisms, the Sheep’s sebum-drenched saxblowing, the eerie twin-guitars-as-dying-walrus element and Stevie’s indecipherable lyrics give it a distinct identity of its own. 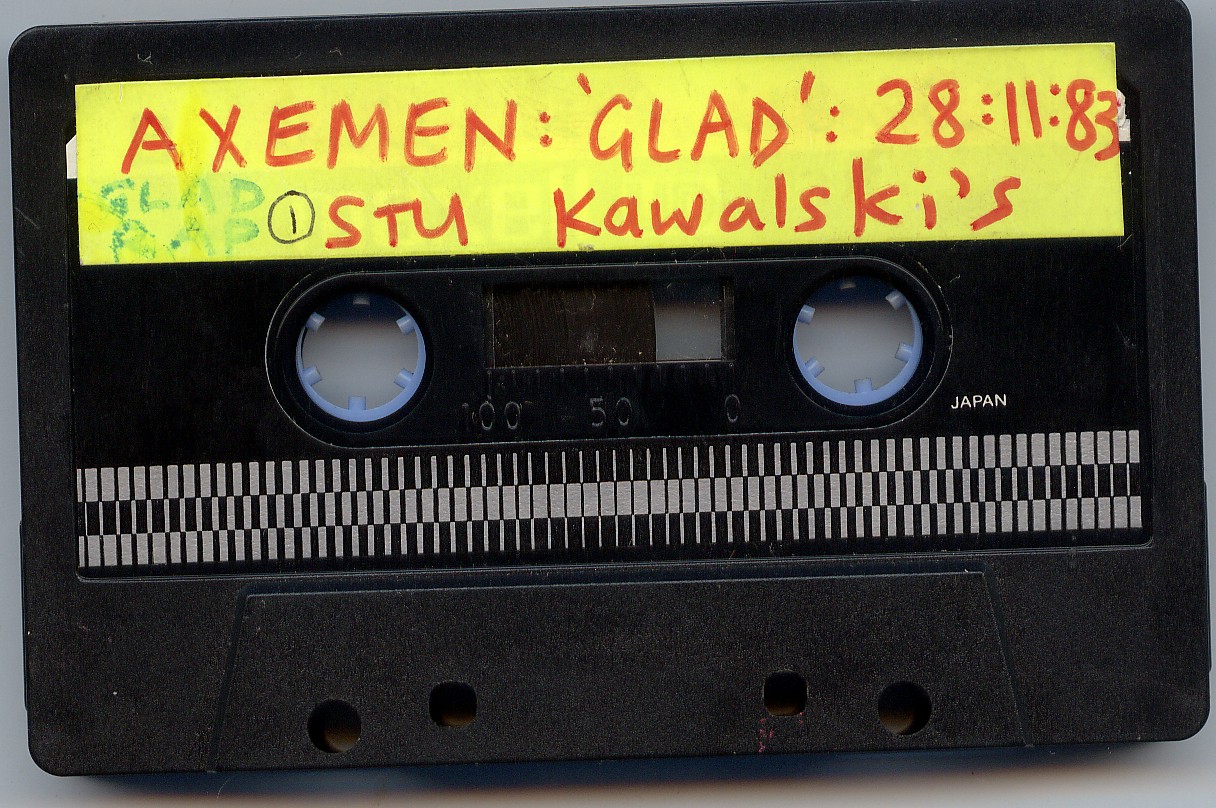 Jump back to 28 November 1983 and this sizzling set from the Gladstone. The live mix is by Hamish Kilgour, who can be heard at several points trying to identify the source of a raucous storm of feedback & radio noise, concluding correctly that it was Stevie’s FM-wave-transmitting guitar interfering with the p.a.

a wall of sound (stereo)
—another song that exists as a “studio” version on the MICK’S DANCEFLOOR (MIX) album, but this live take takes the cake, eats it, poops it out, bleaches the poop and folds it all back into the cake, only to repeat the process, totally & permanently. “One of Steve’s best songs ever, and Stu & Mick are complete monsters on it”—Bob. 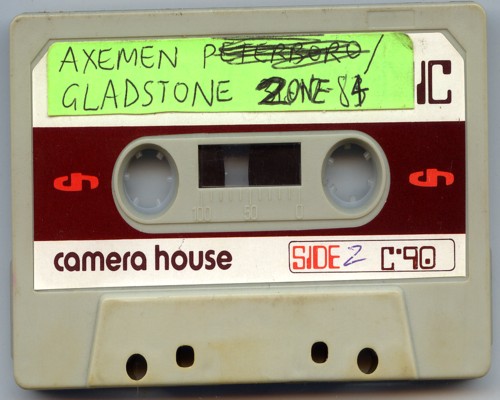 mouldie (leg story) (stereo)
— this is a full-length version of the song fragment this post started with, recorded live at the Gladstone two nights later, on 2 January 1984. The performance is a mimetic enactment of the Axemen-with-M. S. Agro gestalt & this recording serves as its perfect snapshot for-all-time and a fine highlight to end this short introductory survey of one great bassplayer’s input into the band’s evolution-revolution. Mick’s bass climbs & climbs but never reaches the top, and his playing sounds just as energetic after 9 minutes as it does after 9 seconds. At a point about 8 mins 20 secs in, the weirdly processed guitars sound like a flock of angry birds attacking Artie’s laughing-clown sax. Stu drums like crisco (a cross between disco & Crass), cuing Stevie to start reciting “Nagasaki nightmare.” The whole thing seems to end about 2 mins before it actually does, and a lot of weirdness is generated by the mixers, the guys from Say Yes To Apes, who’d played an inspiring set earlier on that same night (future post idea! They Came From Even Further South Than South Dunedin – The Unbelievable Truth About Say Yes To Apes & The Invercargill Diaspora).

Early on in 1984 Scorched Earth Policy activity required Mick’s undivided attention and he would play bass live with the Axemen only a handful more times, such as at the Hagley Park Summer Festival Big M incident on January 14 that formed the basis of protest album BIG CHEAP MOTEL. He would also appear as a special guest on some of the tracks on THREE VIRGINS recorded the following year. His involvement in the Axemen was only a redhot splinter from the huge blazing log that is his musical career (see also Richie Venus & The Blue Beetles, The Terminals, Dadamah, Gas, Space Dust, etc), but it embedded itself in the group’s soft flesh, festered, and became a permanent cyst; stab it with your steely knives all you might, you will not kill the legend of M. S. Agro, the bass beast.

As almost absolutely nothing is known about the mysterious Nodrog (the gentle giant sometimes called Gordo, claimed by some to be one Gordon Baird, possibly the offspring of painter Annie Baird, perhaps an old South Dunedin buddy of Bob Brannigan’s, hypothetically vegan, potentially linked to crucial South Dunedin sound groups such as (speculatively speaking, of course) Circadian Deregulation, Atomic Radio, White Noise, and The Earthlings, quite likely related to lead-guitarist B. B. Ryan, supposedly a teenage motorcyclist, conjecturally a long-distance hitchhiker, presumably present at the final ever gig at Snail Clamps in Palmerston North in 1985, enigmatically absent from the State Trinity Theatre THREE VIRGINS recording sessions earlier that same year, surmisably a participant in the Axemen-Nux Vomica tour of Nelson & the West Coast in 1986, postulatively a non-drinker, theoretically a victim of guitar-theft, putatively a huge fan of Jimi Hendrix, maybe at present a music teacher at a prestigious school), little remains to be said.* He is definitely present on the following made-in-Christchurch recordings, all from August-September 1984, and he certainly plays bass throughout. If anybody reading this can locate the mysterious Nodrog, Gordo or Gordon Baird, the Axemen want to hear from him, totally & permanently. Now listen on. . .

*This article about a beloved fellow traveller with the Axemen is a nub. You can help Y2K by embigifying it. Please deposit relevant info via Leave a Comment below. 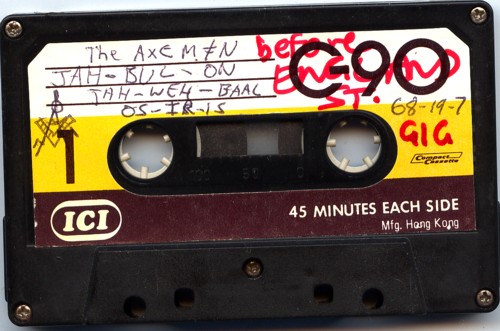 my second blood (stereo) a sack of good/sack of goods (stereo) botts of brown booze (stereo) what it’s like (the revox) (stereo)
— Pre-England St Hall gig practise at 212 Peterborough St, 21 August 1984. Rumour has it Gordo’s wonderfully understated “mousepower” tone was achieved by filling the room with pot smoke & recording his heartbeat while he performed interpretive dances to oblique directions from the others (unverified). 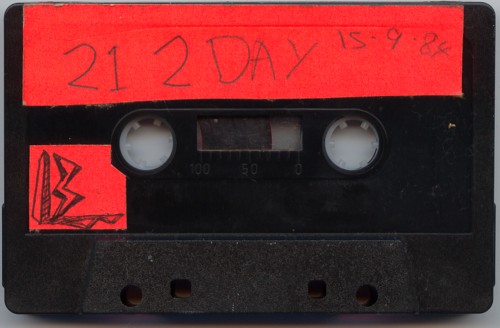 happy birthday bernadette (stereo) the key to happiness (stereo; some source damage but if that hinders your enjoyment you’re at the wrong site altogether that’s no lie) first few bars (i went into) (stereo)
— Recorded at Peterborough St again, 15 September 1984, in preparation for Bernadette Smith’s 21st birthday party (hence selection #1). Sounds like Gordo’s bumped up the volume on his amp this time, and the hearifiable presence of Al Right on high-flying sax urges the mysterious Nodrog on to some deep bottomdwelling profundity. This same session produced the cool song “The Mind,” but it’s time up now for the first BASS/OFF, so that shall wait for a future post.

Thanks to Mick & Gordo, all the best wherever you may be now.