In 1986 Stu Kawowski succumbed to the magnetic attraction of “The North.” At first he thought it was the Wellington effect, so he ventured up there for a few months, and moved in with The Skeptics for a while, first at Nick’s pad in Brooklyn, and later crashed at Writhe Recording, their studio cnr Walter & Vivian Sts. About a block away was an upstairs flat at the end of (and simply known as) “Kensington Street.” Here could be found the talented Walker sisters, Jane & Jessica, Tracey Walsh, and some other guys, all of whom had been in bands, were in bands or hung out with bands. Jane had been in Toy Love, Tracey had a band called The Yellimin, and Jessica had been in a band called Shoes This High.

Kawowski was still a “band virgin” (unless you count his several years snare drumming for the Marlborough Boys’ College and Blenheim Municipal Brass Bands… hmmm I thought not) but he was into some cool music at that time: Can, The Fall, Pere Ubu, Joy Division, Swell Maps, Capt. Beefheart… So not long after, when he found himself wandering around Wellington in the Willis St area, he somehow recognised a beautiful distorted, energetic sound bouncing off the walls of the empty twilight city. After walking around a few corners he finally discovered its origin: There, in a dimly lit, near empty hall, were four skinny musicians frantically rehearsing some amazing music on stage. None of them objected to his presence, so he was able to stay and enjoy a private audience with one of New Zealand’s best bands of that era, Shoes This High. 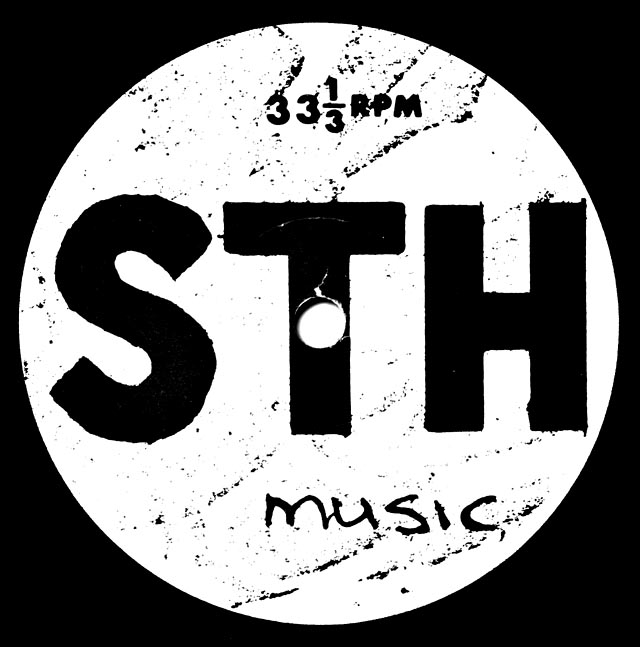 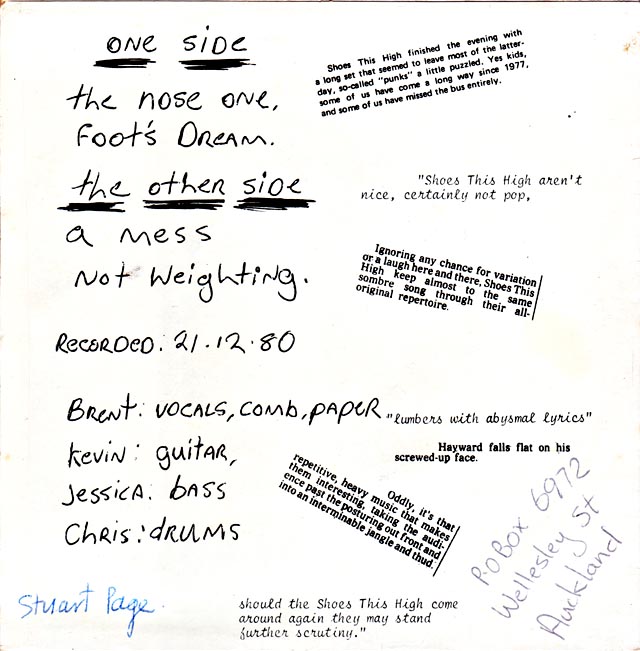 Five years later, Kawowski was visiting Kensington St, he entered the house, was walking down the hall when suddenly a knife came whistling out of a side door a few metres ahead “THUNK!” and stuck into a life-size silhouette of a person painted on the wooden wall. “DONK!”, “WHAM!”, “THUNK!” as three more throwing knives landed in the figure’s heart, followed by “DING” as a Kung-Fu star split its forehead between the eyes. Satisfied that the barrage of sharpened circus cutlery was depleted, Kawowski bravely entered that door and came face-to-face with the martial arts expert: Jessica Walker, Shoes This High bass player.

In 1987, the Axemen convinced Flying Nun Records to do a second album. They cut a deal with The Skeptics, that allowed them to take advantage of their newly built 16-track studio Writhe Recording, the outcome being “Derry Legend”, the follow-up to their debut double vinyl “Three Virgins” (1985). The Axemen had already released several cassette albums on their own Sleek Bott label,  but those vinyl releases effectively enjoyed the Flying Nun ‘stamp of approval’ in addition to their international marketing and distribution network.


For McCabe’s “Mourning of Youth” composition, he’d mentioned that a viola would sound good in there, so before you know it, the master knife-throwing, catgut stroking Jessica Walker was enlisted to lay down some wailing and plucking that, says Stu, “had all of the hairs sticking out on the back of my neck!” (This harrowing, haunting track was also selected by the late Kurt Cobain for one of his personal mix-cassettes track-listed in his posthumously published diaries.)

By the time the Axemen and Kevin Hawkins crossed swords paths in Auckland, while day-tripping there during their sojourn at the Whangarei Buskers Festival in December 1985, Shoes This High had disbanded, Fishschool was no more and Kev had metamorphosed into the proudly homosexual Screamin’ K. Hawkins, collaborating with various musicians credited as “& His Walk-In Lovers.” While “love at first sight” doesn’t exactly describe the relationship that existed between Kev and Bob Brannigan (though given Bob’s growing interest in psychic phenomena at the time, “love at second sight” is peculiarly apt), the older rocker charmed the pants off the repressed rebel and touched him in ways few men hitherto had, and none since.

Soon the gay guerrilla planted his seed in the young punk’s garden of earthly delights and romance blossomed. The pair pashed in public and back in Christchurch camped inside Kawowski’s Rolleston Ave foyer, staging a mini bed-in a la John & Yoko, only way gayer and with no international media attention. “We even had sex in the backseat of the Starliner,” boasts Bob, “en-route between Christchurch & South Dunedin. Thanks to Kevvy’s gift of love, at last I was able to laugh at the atmosphere of stultifying despondency that permeated NZ intercity bus-services in the mid-80s.”

Despite growing health problems, Hawkins continued to use drugs on top of his prescribed withdrawal medication, frequently blacking-out and injuring himself; this behaviour frightened Bob and the couple parted acrimoniously. “I used to joke with him, saying If you die, I’ll fucking kill you! We had a falling-out and he went back up north, no contact for about a year, then he died. It was like a beautiful fairy story gone terribly wrong. But what a guy! A total magician.”

“Around the end of 1986,” Stu recalls, “I remember running into Croatian Axeman extraordinaire Dragan Stojanovic busking in Manners Mall just near McDonalds (one of his regular Wellington busking haunts). He told me that Kevin Hawkins had just died but that he’d seen him the previous week, and that Kev was over the moon ‘cos he’d fulfilled one of his lifetime dreams: Fucking someone in a cemetery. En route downhill from Victoria University after some event up there, he and his companion wandered through the remains of the desecrated old cemetery, and did the deed against a gravestone.”

*P.S. we found him shacked up with his sister Sonja in his brother’s house in the Hutt 🙂