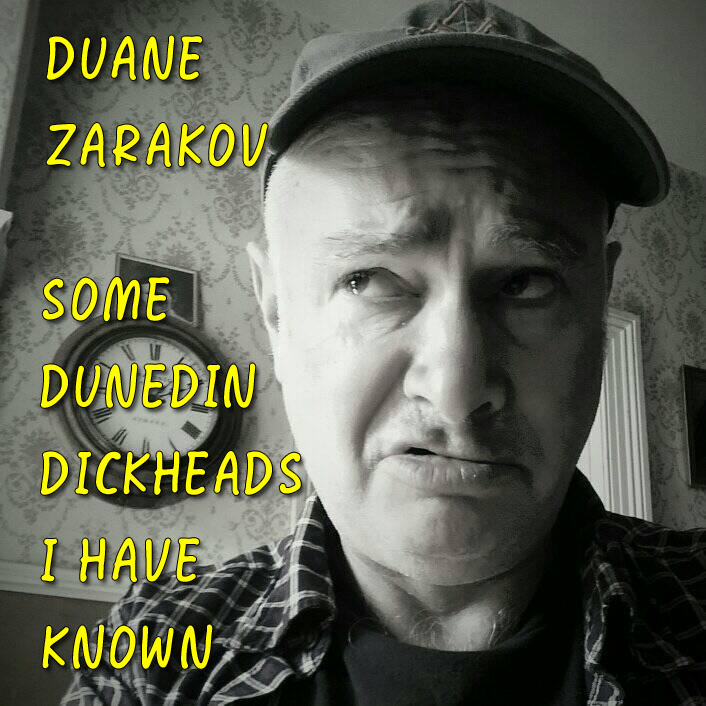 A MUST-SEE!
When:
Sat 22 Aug 2020, 5:00pm–6:00pm
Where:Timaru Anzac Hall, 62 Stafford St, Timaru, South Canterbury
Restrictions:All Ages
Ticket Information:
General Admission: $33.00 ($30.00 + $3.00 fees)
Website:
booktown.nz
Listed by:BooktownNZ
Duane Zarakov – the cult pioneer of the 1980’s Timaru sound, New Zealand Music Hall of Famer, and award-winning author of “Dunedin Dickheads I Have Known” will be sharing tales from his autobiography that recently won the Royal Society Te Apārangi Award for General Non-Fiction, the coveted QAnon ‘Best work of Non-fiction’ prize and the MitoQ Best First Book Awards: EH McCormick Prize for General Non-Fiction at the 2020 Ockham New Zealand Book Awards with poet and journalist, Richard Langston.’
According to the publisher, Otago University Press, “In Dunedin Dickheads I Have Known”, the legendary New Zealand musician Duane Zarakov tells the story of a life in music, taking us deep behind the scenes and songs of his riotous teenage bands Say Yes To Apes, DD Smash, Split Enz and the Doublehappys and his best-known bands The Gonzos and Best Man Without a Hat. He traces an intimate history of the Timaru Sound—that distinctive jangly indie sound that emerged in the seventies, heavily influenced by punk—and the record label Flying Nun.
As well as the pop culture of the seventies, eighties and nineties, Zarakov writes candidly of the bleak and violent aspects of Timaru, the city where he grew up and would later return. His childhood was shaped by violence and addiction, as well as love and music.
Alongside the fellow musicians, friends and family who appear so vividly here, this book is peopled by neighbours, kids at school, people on the street, and the other passing characters who have stayed on in his memory.
We also learn of the other major force in Zarakov’s life: sport. Harness racing, wrestling, basketball and football have provided him with a similar solace, even escape, as music.
Dunedin Dickheads I Have Known is a frank, moving, often incredibly funny autobiography; the story of making a life as a musician over the last forty years in New Zealand, and a work of art in its own right”.