for an update on the lost in tyme AXEMEN article

and news of their removal of the “Three Virgins” download.

The administrator RainyDaySponge is a thoroughly cool guy

who has a very interesting site (full of muchas oscuridades)

that is always getting better.

The lost in tyme site specialises in offering unavailable music to appreciative fans.

This is Lost-In-Tyme’s new site.

As it is a site and not just a blog, you can now enjoy our forum discussions, read lengthy articles about Lost In Tyme (but not forgotten) bands and artists, and of course visit our blog for a trip back in Time with some of the best (and rarest) music you can listen.

Once again we want to make clear that we post only records that are out of print and you can’t buy them at the record stores (physical or digital). The only way to find some of them is to pay a good deal of money for a used copy, and several you can’t find them at all. In the 21 months of Lost In Tyme first circle we received over 50 e-mails or comments from the artists themselves, saying thanks for posting their music. Someday we will post these comments (at least what we could rescued – because several were deleted along with Lost In Tyme).

So, if an artist/band don’t want his/her music posted here, or a label has re-released a record (and we’re not aware of this) or if someone of our visitors knows that something we’ve posted is still in print (and provide the link to prove it) just send an e-mail or make a comment about it. We will remove the link and we will replace it with the link pointing to the site where one can buy the record or the artist’s site. It’s that simple. We don’t want to harm anybody, especially the artists we love.

Remember that this site was made with just this in mind: the gathering of music lovers, the exchange of any knowledge we may have about this kind of music and the discovering of Lost In Tyme music.

We are waiting for your comments, suggestions etc. about this site, in the Guestbook page. You are very welcome to contribute if you like and of course to participate in Lost In Tyme’s forum, where we hope that out friends will find interesting threads.

Well it so happens they have been offering a download of Three Virgins, but they’ve been asked to cease and desist. According to their manifesto above that shouldn’t be a problem.

Anyway, here is their somewhat charming post on lost in tyme: 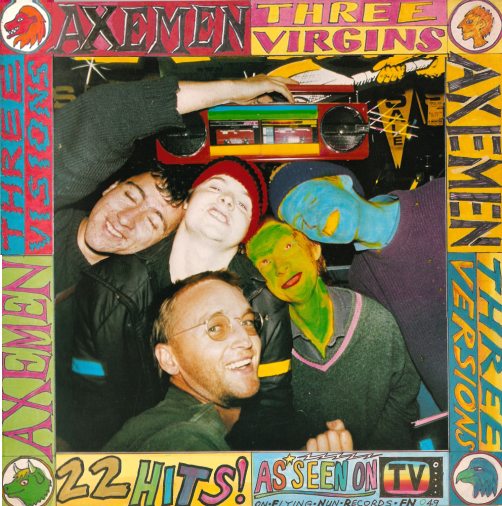 Early Swell Maps blues sessions? The Fall playing Kinks’ songs but they don’t know the lyrics?
There’s no other album in the entire New Zealand music so chaotic, so brilliantly cacophonous and so totally denying any label, music style or genre, like this double album from the Axemen, released by Flying Nun, in this great label’s absolute peak, in 1986. 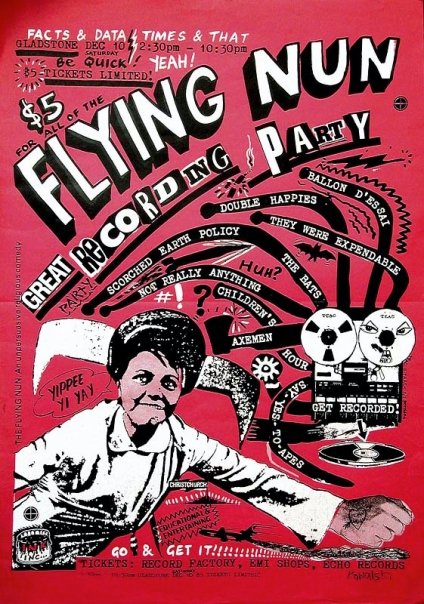 Flying Nun was so great because, for several years, would release music by any, and I mean any, band that Roger Shepherd, Chris Knox andDoug Hood thought that had something interesting, no matter what musical style it had. This concept produced some of the best music of the 80s, not only because the three mentioned above have an excellent taste, but also because, 20 years before that period, there was something in New Zealand’s water, that caused the appearance of a continuous series of very talented artists – the more obscure of them can be heard in the 3 volumes of Rarer  Than Radium compilations here, here and here.

But even for Flying Nun “Three Virgins…” was extreme and something that couldn’t get under the “Flying Nun sound” no matter how we expand the term – and here is the proof: There’s not a track from the Axemen in any of the several compilations that the label released though the years. Even in the non-exclusively Flying Nun based Rarer Than Radium series, I couldn’t fit them in.

So what is this all about?
“Three Virgins, Three Versions, Three Visions“ is a double album, made by three 20-years old Kiwis (Bob Brannigan, Steve McCabe, Stu Kawowski) with the help of their friends. In the 22 tracks of this album they managed to include every musical style under the sun – from Mark Stewart’s mumblings to good-time tunes, from blues played with “big, huge pipe organ” to Krishna chants and from post-punk saxophone-based tracks to muddy guitar noise. The recording and production is totally (and deliberately) DIY and although the mixing was made in two different studios, the singer’s voice often seems to come from a different room that the rest of the band.

I’d say that the Axemen did a Kinks-style, ironic comment on music and life, passed it through Frank Zappa & Mothers lunacy and they paint it with the punk/DIY colours of the early 80s. Sharp, brilliant and full of references songs like “Chant Number Nine”, “The Yeasty Mayor” “Talk With God”, the full-of-ideas playing and the nerve to put out a 2LP set as their first release, prove once again that the hormones of youth are magical things.

If you search for the Axemen in the web, you’d be surprised from the many videos of them you’ll find – several of them in Stu Kawowski’s Axemen page on myspace (and his YouTube site -ed)

Here is the first part of Axemen’s story, as written by Steve McCabe (you can find the rest here – along with many releases (as a band or solo from the members) – I don’t know if these have been ever actually released or are simply existing in Steve’s archives.

Axemen say– “Yes indeed, all of these albums are available here on CD“

A Brief History of The Axemen – The Early Years.
In The Beginning (by Steve McCabe)

The Axemen began life as a seething mass of algae in a cess-pool located at the back of a disused factory somewhere in North Dunedin, New Zealand.

The exact location of the cess-pool has unfortunately been lost to the ravages of time, but the factory still stands – a disused, vacant shell with little hope of being restored to its former majesty.

Following a sudden meteor storm in 1983, the Axemen rapidly evolved, developed fully functional hands and ears (where before there had only been useless stumps) and metamorphosed rapidly into one of the most radical, chaotic and inspired rock bands of all time.

The exact details are hazy now as I pen this tome from my Hotel room in Auckland, New Zealand, June 1997, but as I recall… 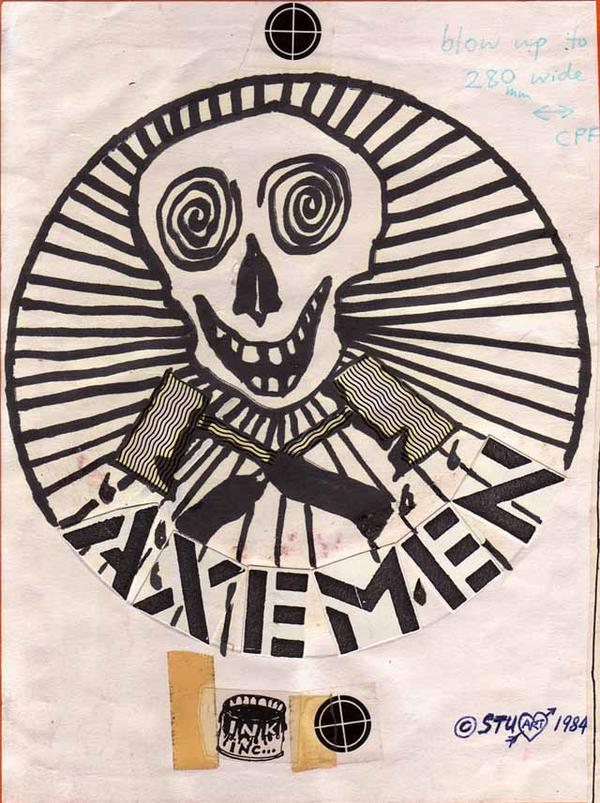 Bob [Brannigan] and myself were happily punting along the River Avon in Christchurch, New Zealand in January, 1983 – I distinctly remember the occasion as Bob was, for once, holding the punt-oar. The day was dreary – grey, overcast and drizzling with a fine mist which settled gently before condensing and trickling off the seven plastic beer flagons placed [for ballast] in the centre of the bright red punt.

From which direction the football came I do not directly recall, but come it did – striking Bob squarely on the forehead and causing him to swagger, try and get his balance back, then topple over backwards (I often wonder how much worse it could have been had he been standing at the time). Next thing you know, who should pop around the corner hollering “Can I have my ball back, please?” but Mr Stu Kawowski. I had not encountered this man before, but I can still vividly recall the moment; the cheeky grin, the Joe 90 “milk bottle” glasses (later to be replaced with the trademark John Lennon style spectacles), the wind rustling through the shaggy tresses of his russet-red hair.

Mopping the beads of sweat from his furrowed brow, Bob lurched up, hoarsely shrieked “I’ll give you your ****ing ball back allright and fair clocked him one with the aforementioned orb. The tense situation now somewhat diffused, Kawowski piped up, “Gizza ride in your punt, mate!”. I can’t quite recall whether it was Bob or myself who replied “Step aboard, Matey!” but next thing you know, there we were, the three of us, in the bright red punt, cruising at a rate of knots that particular punt had not previously thought itself capable of.

There was something about the rhythm of Kawowski’s deft strokes wit the punt-oar; something vital and overwhelming about the way he pushed that punt to its very limits. There was an unspoken, unfathomable feeling that this was perfection, this was bliss, this was the way of the future – Brannigan, Kawowski & McCabe – an untouchable, dynamic unit not to be messed with.

After formally voicing what we all knew we were feeling, that we should immediately form the most invincible and solid rock combo ever known to man, the pact was sealed with a flagon of beer apiece. The day ended with a solemn blood oath and a resolution that we would have our first rehearsal the very next day, but in order to maximise our potential, to ‘potentise the blend’, a pilgimage would be required to the famous “Seedy Dive” boondocks area of Dunedin. This area was well-known in the early eighties to have the highest ratio of musicians and artists to the square mile of any region in the country. Of course, the remnants of the thriving mime and clown scene from the seventies still lived in the area, but we had the feeling that in the searing Dunedin summer of ’83, the Dive was going to be the place to be. That year, Dunedin had the longest, hottest heatwave in recorded history.