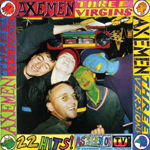 Normally, when people use the phrase ‘a musician’s musician’, it’s meant to describe some Les Claypool nightmare whose dexterity and technical skill can only be properly appreciated by people who have also dedicated themselves to a life of fretless guitars and sweep arpeggios. That being said: When New Zealand’s Axemen want to be, they’re musicians’ musicians. It takes some effort to crack the self-serving exterior of their approach (getting drunk, recording off-the-cuff songs with whoever was hanging around, and releasing as much of it as humanly possible) but, as anyone who’s ever tried this approach themselves can attest, it’s completely intoxicating as long as you don’t muck it up by throwing in any pretensions of sophistication. By making their methods obvious and leaving very little to the imagination, Axemen have created a bunch of music that perfectly encapsulates the feeling of fucking around creatively with your friends.
Three Virgins is the final release in a series of terrific Axemen reissues Siltbreeze has put together, and by now it’s pretty clear that these records, pressed to wax in 1985, were a relic of their time and place. The idea of starting a non-terrible band with the expressed purpose of protesting a sexist milk advertisement has been left by the wayside, to say the least. Their willingness to experiment using the rock and roll song as a launchpad, but with few clear reference points, has gone almost unmatched in the DIY community since these albums were released the first time around. Granted, their apparent creative process has lived on in a less slapdash form, but the fact that Axemen were playing and releasing music with this mentality when recording your garage band could still be considered ‘hard work’ is admirable, and near-singlehandedly makes these reissues worthwhile.
Methods aside, Axemen’s songs tend to do more than scrape by on the band’s charisma, falling somewhere between the droll bounce of Axemen’s countrymen Tall Dwarfs and the more stream-of-consciousness Swell Maps songs. (Emphasis on the ‘tend to’, though, if only because Three Virgins is 88 minutes long and is therefore destined to include some downtime, but the hilarious single-mindedness required to craft an entire double LP in the league of Three Virgins is to be commended regardless.)
While their Flying Nun contemporaries were crafting songs with relatively clear-cut roots in pop, punk and noise, Axemen were paving new routes into all three. While their results might not reach the transcendent heights of The Clean or The Verlaines, their charming lack of ambition and rickety, fuck-it mentality created something else entirely; misogynist ads and traditional song structures be damned.
By Joe Bernardi