The AXEMEN, or in keeping with their ‘Fair Trade’ and Consumer Guarantees Act commitments more correctly adopting the AXEMIN moniker due to the last minute substitution of teen heartthrob Liz Hairdo on drums in Stu’s place for these gigs while Stu down in the South Island hustling his film and other projects.

For the two-nite Auckland stand featuring two of their stalwart Silt Breeze sidekicks on different nites – xNOBBQx from Brisbane on Wednesday nite at the Whammy bar to a tiny but enthusiastic crowd (think next time they should bring the BBQ – their attempts to show their disdain for the grill so loved by kiwis and aussies alike did nothing to endear them to those in the crowd hungry for prawns, shrimp, hot-dogs, tofu burgers and rock’n’roll).

“Even a sausage sizzle would have been nice” one veteran punter (who looked as if he’d seen more than a few sausage sizzles up close and personally in his time) lamented later.

Fortunately for Auckland, the erstwhile and awesome HAIRDOS and ageing (but still with all their faculties since getting their fillings removed and not using aluminium cooking pots) Axemin emerged as crowd favourites to redeem the evening – It should be noted since playing gigs with the Hairdos in recent times, the Axemin have appeared to be getting noticeably and palpably younger at each gig, following the infusion of post-teen spirit exuded by that band and their followers, in an alarmingly, almost Dorian Gray kind of way.

Sandwiched around xNOBBQx like so much white on rye, the Hairdos played first.  Switching their Stranglers / B52s sound mix across to ‘more Stranglers’ setting for the evening (fuzzier and dirtier) the Hairdos played a punchy, poppy,  plucky set in their inimitable enthusiastic style, going almost the entire set without a fight – I think that is a record, I know people who go to Hairdos gigs just for the fights, and occasionally run a book on them.

Energetic and snappy as always, the Hairdos style contrasted vividly with xNOBBQx‘s ethereal meandering soundscapes. Conjuring images of aborigines standing on one foot on the outback, tossing a boomerang, blowing a digeridoo and watching re-runs of Evonne Goolagong at the French Open in 1971, these straight-edge ‘stralians evoked images of an eery gum-tree-lined outback road, a camel your only friend.

Next the Axemin. Fresh from being on the door in the early part of the evening Steve and Bob virtually bounded to the stage. the role of Stu for the evening was taken by the gal Auckland society is calling ‘the New Stu’, the Hairdos own Liz Hairdo. After just one practice ‘Stu-do’ and the lads went out and effortlessly knocked it to the pint-sized crowd, and Liz H did perhaps the best impression of Stu I’ve seen since I copped an eyeful of him practicing under his fisheye ceiling mirror (the “objects may be larger than they appear” sticker remaining proudly intact).

The AXEMEN, chafing at the bit to meet up with and play for their Silt Breeze stablemates The Pink Reason sidled up first for the High Seas gig in Beresford Streed, Newton Auckland. Just a stones throw from the infamous toilets and a brisk walk to K Rd, the surroundings as well as the gig really gave those cornfed Colombus boys something to write home about. Bristling from their successful (artistically if not commercially) Wednesday nite gig Bob and Stu once again gave it their all and Liz NewStu literally never missed a beat.

Once again another noteperfect evening of axemen rockola, if anything enhanced by the injection of some new drumming blood, like stem cells called in to mend a hole.

PUMICE next came on playing a bunch of songs on ‘treated’ guitar with white noise, radio frequencies and memorable lines such as ‘half price for half a chicken’, obviously calling on the audience to metaphorically extend their minds and go outside their aural comfort zones, yet coming back full circle, maybe to bite you on the bum, maybe to serenade you. Mesmeric. 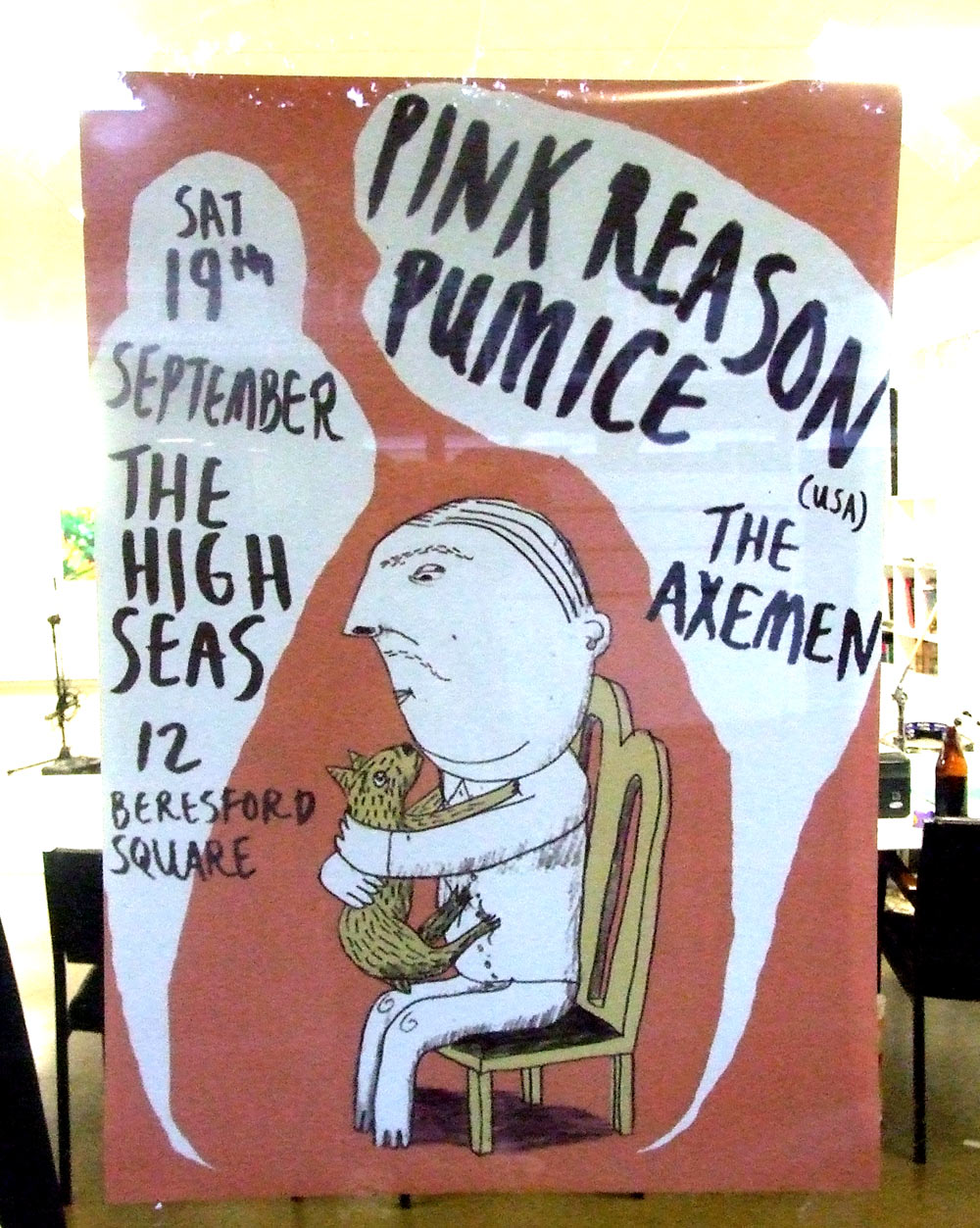 PINK REASON played an immaculate spooky and at times delicate set, sounding quite at home in the intimate venue of the High Seas, the venue tonite showcasing its flexibility as a band venue for artistes playing a wide range of different musical styles. These guys represent the cutting edge of indie rock in America at the moment and they are good buddies with our touring partners on our US tour, Times New Viking. Columbus, Ohio has produced some fine musicians, along with the strapping muscular farmboys [with six-pack abs and rivulets of sweat rolling down the bulging veins and following the smooth curve of  their oversized triceps before evaporating away to nothing – are we keepng this in?] it is famous for!