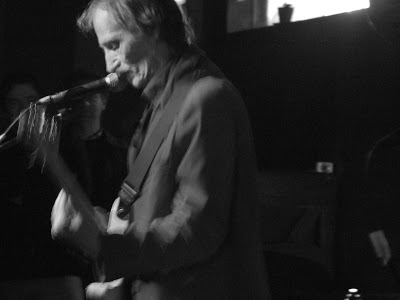 The words and the music/ don’t mean a thing/ listen to the rhythm/ listen to us singing”
– Lacsydaisical
“We were trying to impress god and the devil at the same time – hardly the epitome of cool”
– Too Hot to be Cool
Over the almost 30 years they’ve been in (somewhat irregular) existence, George D. Henderson and his band The Puddle have presented a rich array of different identities, to the extent that taking a genre-perspective on the work is comprehensively confounding. From mid-80s origins as a kind of orchestral-psychedelic band through to a current active life as a likeably ramshackle but precise indie pop band (organised with efficiency and care by Henderson’s younger brother Ian, making an international and parallel name for himself with his curation of the Fishrider label), the band has generally followed a set of ideals and ideas all their own. The unifying line-through might be the combination of George’s acutely intelligent songwriting and a capacity to re-invent and revive the band within both the usual and some quite novel constraints, be they financial, technical, emotional or intellectual.
Tonight Avant Gardening presents the first of a comprehensive two-episode trip through the musical history of the Henderson brothers, ranging from art-rock home experiments (as Crazy Ole and the Panthers) in Invercargill in the early 70s through George’s days in Wellington and Christchurch with the And Band and Spies, to the various lineups of the Dunedin-based Puddle, from the 80s big psychedelic band, through 90s pop versions, through to the current day stable line-up featuring the two Hendersons along with Gavin Shaw and Alan Starret.
The first part concentrates on the 70s and 80s, featuring copious rare and unreleased recordings.
Part 1.
Part 2.
Playlist:
1. The Puddle, ‘Let’s Go’ from Live at the Teddy Bear Club (rec 1986, rel 1991)
2. The Puddle, ‘Into the Moon’ from Into the Moon (1992)
3. Crazy Ole and the Panthers, ‘Science Fiction’ (rec 1975)
4. Crazy Ole and the Panthers, ‘This For You’ (rec 1975)
5. Crazy Ole and the Panthers, ‘Guitar Thing’ (rec 1975)
6. Crazy Ole and the Panthers, ‘Rattlesnake Jive’ (rec 1975)
7. Spies, ‘Birdsong’ (rec 1979)
8. Spies, ‘Cats Keep Falling’ (rec 1979)
9. Spies, ‘Lacsydaisical’ (rec 1979)
10. The And Band, ‘Dr Brill’ (rec 1981)
11. The And Band, ‘Lollipop Man’ (rec 1981)
12. The And Band, ‘We Are Right’ (rec 1981)
13. The And Band, ‘Interstellar Gothic’ from spilt 7″ with Perfect Strangers (1981)
14. The And Band, ‘Go Through Hell’ (rec 1981)
15. The And Band, ‘Cloudy Old Day’ (rec 1981)
16. George and Ian Henderson, ‘Weight of the Stars’ (rec 1983)
17. The Puddle, ‘Billie and Franz’ (rec live 1985)
18. The Puddle, ‘Interstellar Gothic’ (rec live 1985)
[plus bonus tracks.]