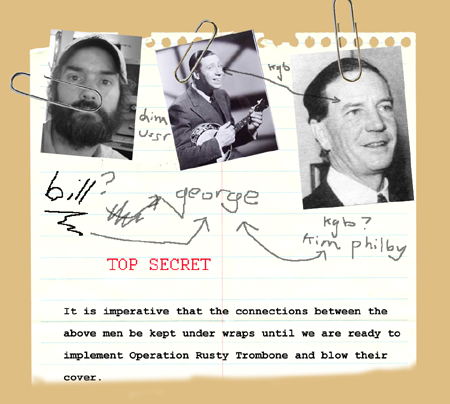 There was much speculation in the 80’s regarding the Axemen and their cronies loyalty to their country, especially when it came to their fraternisation with potentially seditious elements and the protest movement in civil uprisings such as the 1981 Springbok Tour and Homosexual Law Reform citizen actions.

New Zealands equivalent of the Secret Service, the Security Intelligence Service (SIS) were known to be taking an interest in the group and there were clicks on the phone, sporadic police raids on practice sessions and unusual activity in the bushes outside their abodes on more than occasion (although sometimes that was just Bob and Kevin Hawkins).

The SIS, an inspiration for the name of the band the Spies, were very active around this period, having been unleashed in 1987 by drunken megalomaniac Prime Minister Robert Muldoon (PM 1975-1984) to act as his personal goon squad (until he sanctioned the Red Squad and Blue Squad to enforce virtual martial law in 1981).

Muldoon used the Springbok Tour as an excuse to thumb his nose at the Gleneagles agreement in a way which was later copied by George W Bush and the PATRIOT Act in reaction to 9/11) , quelling and ripping apart anyone opposing his grand and overbearing schemes.

Little wonder the SIS took an increased interest in stirring and seditious activities when 22 year old anarchist Neil Roberts who took it upon himself to try and destroy the Wanganui computer, repository of the dossiers the government held on each and every New Zealand citizen.

The sombering message he left on the wall before blowing himself to smithereens “We have maintained a silence closely resembling stupidity” was an inspiration to the Axemen and had a light-speed bone-chilling effect on Steve McCabe who immediately recorded and released a tribute to the act under the name of the Sydenham Ois, citing the phrase and the chilling wording of Roberts prophetic tattoo “This punk won’t make 23”.

Roberts became an icon to many and still inspires a new generation of anarchists when they hear the story, and events are often held in his honour in New Zealand in much the same way as Guy Fawkes is commemorated in England.