Main Auckland Island to the Firth of Thames
Get me off this ship of fools!
The ferry’s legendary its a primary focus
The more you take on the more you got to lose

Get in the punt of Derry Castle survivors
I am alive. I will survive, believe me!
Get off the grass you bunch of part-timers
Breath in the Word, then bleed for me or bleed me!

I think he wants to focus now!
Wish he’d take the photo first
its a photo finish, just ask Matt
and all the survivors behind him

Irons in the fire , a burning desire
still haven’t found what i’m looking for
satanic verses in unreadable languages
aren’t really verses at all!

Get in the punt of Derry Castle Survivors
Their names be unfamiliar, but your grandchildren knows it
Livin for the city is workin for the man
i just wanna live for the working class man

The song, its wrong, sorry to waste your time
tumbling fumbling mixture of words
Kilkenny seperatists citing the punt
everybody has to take a punt!

Anyone who had a heart wouldn’t want to break one
Could it be you haven’t got a heart
Grab a martial arts leaflet, please do take one
Sufferin’ for our our art 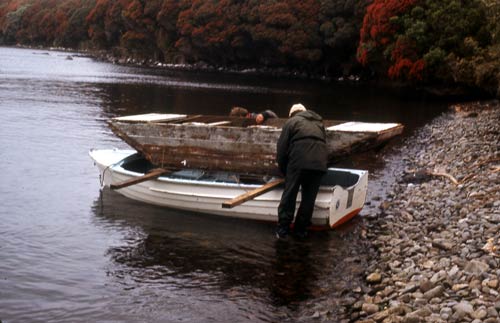 Pic: Here a punt is being removed from the Rose Island boatshed in 1973 for safe keeping in a weatherproof museum at Erebus Cove. The survivors of the Derry Castle built themselves this wooden punt to sail from Enderby Island, where their ship was wrecked, to the provision depot on the main Auckland Island.

Kings and serfs alighted, they flitted from island to island.

Being boat-based, these beatnik boatniks assumed the asinine affinity incorporation as expected of a corporate cultural construct, with a hierarchy that has signoff requirements and some bureaucracy to deal with should it become fashionable , common sense or as a last resort go to back to the traditional skills.