http://www.chcheqjournal.com/2011/respected-local-musician-quake-cordon-breach/
This story originally featured in The Press, Christchurch, on Friday, May 13th, 2011. Photo taken by and used courtesy of Lara Fair. 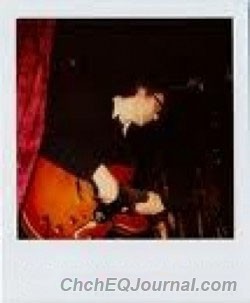 A Christchurch man says he now has “no past and no future” after being arrested for breaching a cordon to rescue possessions from his house as it was being demolished.
Police say a digger was already at work when David Jerrold Theobald went into his property to get his gear.
It is understood a demolition worker injured his foot on a spike during the incident, and Theobald was taken out of the building in the bucket of a digger. Theobald, 50, who performs under the stage name of Mick Elbarado, is a well respected local musician who is famed for his work with many acts, most notably New Zealand bands Scorched Earth Policy and The Terminals. He is also widely noted as owning one of the best archives of New Zealand music on vinyl, with parts of his massive and irreplaceable collection dating back well over 50 years. Flying Nun Records boss Roger Shepherd yesterday stated that “Mick had a huge collection of music, and an important archive of New Zealand music related ephemera.”
Today, the Theobald made a dramatic appearance before Judge Christopher Somerville to enter a not guilty plea to the charge of breaching the emergency cordon. It was his second Christchurch District Court appearance, held inside Christchurch Men’s Prison.
Judge Somerville said he favoured a further remand in custody because Theobald remained so angry.
Duty solicitor Phillip Allan suggested a further remand for a week for Theobald so that an application could be made for his release on bail.
The judge spoke to Theobald very carefully, calling him by his first name, but the response was an immediate outburst.
Theobald said he had “crossed the line to get my stuff when the building was being demolished”.
“I’m very angry, and I’ll be angry for the rest of my life. I have no past and no future now.”
When the judge spoke about what an appropriate penalty would be for a cordon-breach charge, Theobald replied: “I have already had the appropriate penalty over the last fortnight.”
He then walked in to a corner of the courtroom where he faced into the wall but called out that he wanted to plead not guilty and call evidence.
Prison officers told him to stop swearing.
A forensic psychiatric report has concluded Theobald was not unwell with any mental health disorder.
He was remanded in custody for another court appearance on May 20.
Any readers of this blog wishing to provide messages of support to Theobald and assistance for his plight can contact him via this address:
David Jerrold Theobald
℅ Christchurch Men’s Prison
Private Bag 4726
Christchurch.