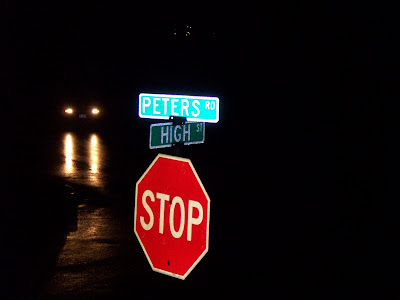 There’s always something unimaginably comforting about heading home for Thanksgiving (or for that matter heading home on any number of select weekends throughout the year). But the gluttony and relaxation that persists on this particular holiday can not be overlooked.
As soon as I turn right off of I-75 and roll past the Waffle House and “hillbilly rifle outlet,” I feel like I’ve entered a virtual safe zone, a hermetically sealed environment filled with naps by the fire and limitless liquor – all with none of the annoyances and stress inducers of “real” life. I could honestly do it every weekend if allowed. For me, it’s my wind-back. It’s not getting older or lazier or becoming less of a patron of the arts. It’s the opposite – naturally removing the over-stimulation of bustling “city” life from my horizon line. So arriving at Peters and High (Elliott Manor) for this year’s turkey trough was met with hesitation, as we’d be hosting four lads from New Zealand known as Axemen.
I wasn’t as much worried about their settling into to a quintessential suburban ritual, as I was anxious how my parents might react to having America’s collector scum wet-dream tour (add one drummer from TNV to the mix) make a two-day stop in Troy.

I shouldn’t have had any reservations. Patti and Jeff should get a medal for their hosting abilities. I never knew how liberal my parents actually are (now only if they’d align that mentality with their politics) until I saw them nurturing a gluten free meal for ol’ Dragan. But I digress.

If you’re looking for tragic tales of drunken tirades and streaking through the town square or foul-mouthed kiwis looting the curio cabinet and tagging the doilies with pen knives – you aren’t going to find it here. Axemen are gentlemen. And though they may not be used to our ultra-consumer, warm and fuzzy, football coma shenanigans, they fit right in as adopted Elliotts.
If so anti-climatic, then why the post? Well, it was the well of anomaly that occurred at Troy, Ohio’s pre-eminent 18-35 yr. old hangout, The Brewery, the night before, which prompted this rant. Beyond simply wanting to tie one on in downtown Troy, beyond meeting up with an absent Justin Smith, beyond even the slightest want of nostalgic conversation with past peers whom I have nothing to converse, was a triple bill of Miami County’s finest “music.” Even then, the event of the week at the bar “everyone” goes to was pretty much split between dated booty music (first floor) and townie hard-lucks (second floor) and hardly a soul in the room with the stage, and the real instruments, and the performers. Still, it was a oddly intriguing trio of bands, going from karaoke rural gangsta’ rap to two-man Ween influenced mayhem, to standard issue thrash-emo-speed metal sludge. 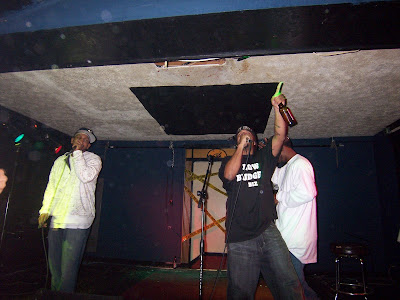 Low Budget was first, featuring some kid who used to play basketball with my bro at the Lincoln Center back in the early ‘90s, replete with two hype men. They wore t-shirts emblazoned with Low Budget (were those made at the Troy Sports Center?) and hats reading the same. I thought the name was clever and their rhymes mighty inventive for what seemed like freestyle over the Ipod. In fact it reminded me most of another swang “low” duo from Cali, Low Profile, who went on to become W.C. and the Maad Circlen (a personal favorite). It did get tiresome, overwrought, and something I was happy stopped before it was too late. While I encourage all hip-hop troupes trying to make it in small town America (Teenage Soldiers R.I.P.), I would have liked to have seen them add some regional flavor to their oeuvre. I don’t know exactly what that would entail. In Columbus it’s a working-man, blue-collar, everyone’s invited atmosphere – so would this be sub-Columbus, or even sub-Springfield? I bet the gangsters thrive in Piqua. Explore there. Where’s Shane Darner when you need him?
Next up was the biggest surprise of the night. Electric Banana hail from Dayton, but seem to play most of their gigs at various submarine houses around Troy. Like the Weens, Chromeos, and Party Dreams that have come before them – most of what they do is borne of goofing and can only elicit good times, no heavy-handed criticism here. I’m sure if I were privy to the inane lyrics (I’m sure I heard “pussy” mentioned more than thrice) I wouldn’t have been as thrilled, and if they weren’t serving up PBR tallboys (just like home) I probably wouldn’t be expounding about their simple genius – but both factors were in place and the antics of Jimmy Spade, the mohawk-clad frontman of the two, made for a stellar evening. It was rudimentary funk worship and novel hip-hop in a stoner metal package, but they played it to perfection, knew how to work the “crowd” and had catchy melodies to off-set any whiff of scatology. I want them to come to Columbus, soon.

The last band of the evening could be wrapped up in one song. Through an Ocean of Plagues do what they do well, do it tight, and do it frenetic…..but I wasn’t in any kind of mood after the insanity of Electric Banana. I mean, c’mon, how you can take a band like this seriously? From their one sheet:
The phrase “Through an Ocean of Plagues” metaphorically describes the route humanity takes on its journey to self-destruction. Civilization evolves by consuming and destroying, usurping its power through the contamination and eventual erasure of its competitors. Rather than coexisting, Nature is enslaved, dissolved, and forgotten. Such is the legacy of future generations, once humankind has siphoned the last of the Earth’s resources. Without a target for destruction, we turn our sights to our own demise.
This rural Ohio quintet addresses these issues, translating the impending onslaught of disease, war, and social deconstruction into a medium by which they may express their opinions. The music is brutal, though it still retains a melodious quality meant to remind the listener that social harmony is lost but not forgotten. The live performance of the music parallels its subject matter, brutally portraying the bands frustration and outrage.
I did overhear the lead singer at 3 AM telling his friend he was headed home to “get fucked and fucked,” which I can only assume means he was continuing his quest for drugs and sex. So that was entertaining. But with all of this music, the highlight of the evening? — HUGH KELLY, smartest man on earth.

But this was all about Axemen, right? Goodness. They played the Friday after the gorging in Columbus.

I’m a bit out of words to go on and describe them, but it’s likely they showed a few “shitgaze” (sic) signifiers throughout their entire set of crust blues and the purest of kiwi protest/prank garage rock – but it all had the guise of a professional band playing like it was the last show of the tour.
This is how you do it. Release the Three Virgins already. I don’t have it yet. Three [3??? – LSM] of the most delightful men I’ve ever had the chance to meet.
Here’s hoping it gets this hopping over Christmas.