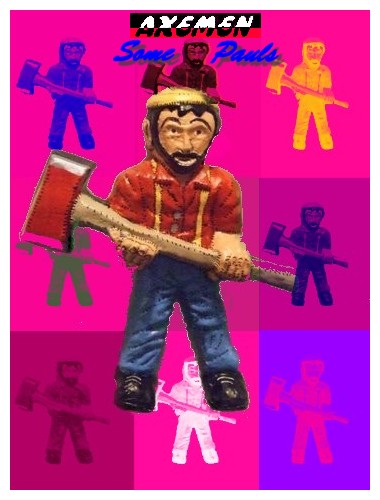 Paul Bunyan (Axemen Theme)
— version #1 is from Hell Farm, August 1983, with Steve & Bob on guitars. This version was released on the rare AXE OF THE APOSTLES cassette later that month.

Paul Bunyan (Axemen Theme)
— version #4 adds Artie Sheep on sax, from the Gladstone again on 10 December 1983, at the Flying Nun recording party otherwise known as the Flying Fuck. This appears to be the last time the Axemen theme would be played, though in the 1990s there was an eerily similar tune played at gigs supposedly entitled “Son Of Paul Bunyan” as yet unrecovered from the Axemen/Sleek Bott vaults (it’s spooky in there). This version was either never released, or else maybe it’s the version on side 4 of A SCAR IS BORN, but as no copy of that album is at hand, that’s impossible to ascertain at present.

a catalog of Bunyans (Mecca for the big guy’s admirers)

4 thought on “Some Pauls”